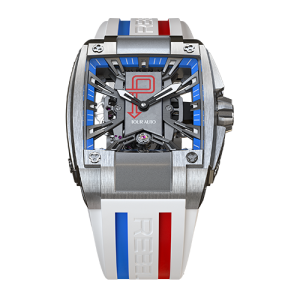 DIVE INTO THE HISTORY

With a DNA combining motor sport and car of prestige, it is quite naturally for REBELLION Timepieces to become the official timekeeper of this iconic event. The 28th edition of the Tour Auto Optic 2000 will take place from April 29 to May 4, 2019 and will see nearly 240 competitors start from the Grand Palais (Paris) towards Deauville over five stages. True to its tradition, the Tour Auto will begin Monday, April 29 with an exhibition of cars at the Grand Palais. Competitors will leave the capital the next morning and drive on the roads of France. The drivers will compete in timed events on four circuits (Dijon-Prenois, Magny-Cours, Charade and Le Mans) and ten special stages on closed roads. The audience, who has increasingly showed up to the roads and circuits for every edition over the years, will be delighted to know that several iconic models have already been reported to make an appearance. The registered car models are those entered in the tests between 1951 and 1973 (with some exception